Miles Davis & Don Cherry: Which One Is The Grifter? 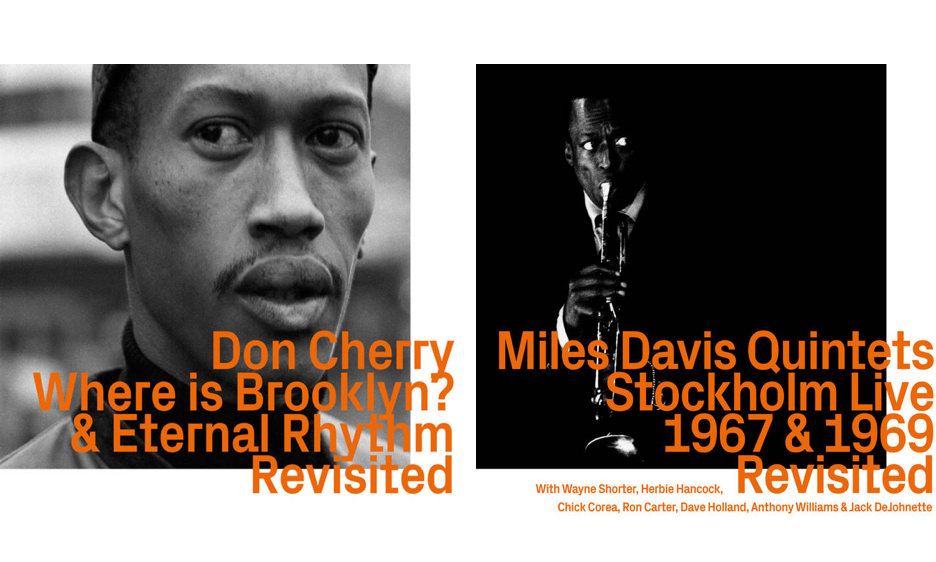 Davis stopped doing what came naturally. Almost overnight, his style became abstract and ill-shaped. Live, he adopted frenetic tempos and barely acknowledged a theme, even the treasures Wayne Shorter wrote for him, before launching into noodling chromaticism. Davis' playing no longer embraced listeners, it gave them the finger.

The Swiss-based ezz-thetics label's Revisited strand of reissues is a jazz connoisseur's dream. The label identifies outstanding albums of the 1960s, sets one of its gifted audio engineers to mastering them and makes them newly available. Earlier editions of many of these albums are hard to find and the sound on all of them is substantially improved by the mastering process—on occasion, the improvement is so marked it is almost like hearing an album for the first time. Recent releases have included studio and live recordings by John Coltrane, Albert Ayler, Marion Brown and Sun Ra, each of them, indisputably, a stone classic.

The word "revisited," however, does not necessarily mean that an artefact is a triumph which deserves to be celebrated—or rather, that everyone will agree that it is a triumph. Sometimes the act of revisiting, that is, reexamining, a supposed masterpiece reveals it to be flawed in some regard. It might even throw up the occasional out-and-out dud or shine a light on a sacred cow about which the jury could usefully reconvene.

Such is the case with ezz-thetics' two April 2022 reissues: Miles Davis' Stockholm Live 1967 & 1969 Revisited and Don Cherry's Where Is Brooklyn? & Eternal Rhythm Revisited. The Cherry album is a gem, but the Davis is an egregious example of the emperor's got no clothes, and marks the start of an almost unbroken downward spiral in Davis' art.

What is irksome, in 2022, is that the legacy of Davis' post-1965 cheerleaders continues to dominate the historical record. The release of the ezz-thetics albums presents an opportunity to voice a dissenting opinion. 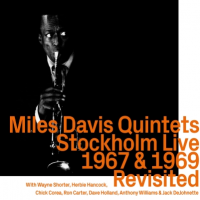 Once upon a time, in a galaxy far, far away, in 1957 in Paris to be precise, the French tenor saxophonist Barney Wilen worked with Miles Davis, recording the soundtrack for Louis Malle's Ascenseur Pour l'Echafaud and performing with Davis in the city's jazz clubs. In his memoir Close Enough For Jazz (Quartet, 1984), writer and trombonist Mike Zwerin, who had played with Wilen and Davis, includes a telling anecdote...

Zwerin recalls sitting in the bar of Paris' Club St Germain one night when Davis' band was the attraction. Wilen came over to Zwerin and said: "You won't believe what Miles said to me after my last solo." Zwerin wrote: "Barney was a hot young tenor oozing confidence and he actually thought this was funny. 'He said, Barney why don't you stop playing those awful notes?'"

This review starts on the premise that it is unfortunate that, a decade later, no one told Davis to stop playing awful notes—or that, if they did, Davis did not listen to them.

It also starts on the premise that in the years before the mid 1960s, when the awful notes began, Davis' contributions to jazz were momentous and numerous and will endure for ever. Davis cut his teeth in Charlie Parker's bands in the 1940s; his formative professional experience was therefore as a member of jazz's artistic vanguard. In the 1950s, he went on to be a pioneer of cool, hard bop and then modal. For these things, jazz will always owe Davis a massive thank you. But the attention that accompanied the innovations proved to be a mixed blessing because, for a particular type of personality, the beam of the spotlight that is concomitant with being a pioneer becomes an addiction. If the person in question is an artist, he or she becomes more concerned with being perceived as cutting edge than with digging deep.

Though it might seem like sacrilege to say so, this is what happened with Davis. In the mid 1960s, as the audience for jazz began to leech away towards what was billed as the new cutting edge—rock music—Davis' reaction was to reject the lyricism and warmth of the style with which he had made his name in the 1950s and sustained it in the early 1960s, and instead to purposefully seek out a new headline-generating approach. He recruited a brilliant band of disestablishmentarian younger musicians—tenor saxophonist Wayne Shorter, pianist Herbie Hancock, bassist Ron Carter and drummer Tony Williams—and stopped doing what came naturally. Almost overnight, Davis' style became abstract and ill-shaped. Live, he adopted frenetic tempos, barely acknowledging a theme, even the treasures Shorter wrote for him, before launching into noodling chromatic improvisations possessing no discernible direction. Davis' playing no longer embraced listeners, it gave them the finger.

Unsurprisingly, the new music did not rebuild Davis' club attendances or reverse the decline in his album sales. In particular, much of Davis' Black audience, which had been his bedrock since the mid 1950s, abandoned him. The new direction did nothing for them, and they believed their ears, not the hype. As Eddie Henderson put it in the penultimate sentence of his liner essay for the 2003 Columbia box set In Person Friday And Saturday Nights At The Blackhawk, Complete, "Eventually, the community lost touch with his music and Miles lost touch with the community."

But Davis was not to be denied. As the 1960s drew to an end, he doubled down, looking for something even more apparently radical, the big fix. He found it in electric rock music, which he had previously, and loudly, always despised. In the process, by accident, he made his final masterpiece, In A Silent Way (Columbia, 1969). But the success of that album was not typical and had more to do with keyboard player and composer Joe Zawinul and producer Teo Macero than it did with Davis.

Davis' subsequent attempts to hitch his music to rock were, frankly, lame. He had no feeling for the music and it showed. He was barely more credible with funk. It is true that, intermittently during the early and mid 1970s, his electric music hit the mark, but it was only intermittently. Following the uneven and overblown Bitches Brew (Columbia, 1970)—a double album screaming to be edited down to a single one—things generally got worse. The downward spiral was helped along the way by the ingestion of industrial quantities of cocaine (by far the most deluding of drugs), Davis' ego (which was the size of a water melon), and a critical mass of jazz journalists which was as desperate to appear hip as was Davis himself. To that mix, add a record company whose CEO encouraged Davis to do something, anything, to find a new audience and recoup the losses the label was racking up.

Davis also progressively lost his talent for, or perhaps stopped caring about, finding super-gifted bandmembers—in the acoustic era, John Coltrane, Cannonball Adderley, Bill Evans and George Coleman, in the post-1965 "second great quintet" era, Wayne Shorter, Herbie Hancock and Tony Williams, and at the end of the 1960s, in the first flush of the electric era, Joe Zawinul, Chick Corea, Dave Holland and John McLaughlin. As the 1970s progressed, and his star sidemen left to go their own way, Davis' lineups became increasingly peopled by mediocrities and copyists.

One of Davis' stated aims in the latter half of the 1960s and early 1970s was to shake jazz up. To draw an analogy, one could shake up the art world by driving a garbage truck into a gallery and emptying the contents on the floor. Indeed, some conceptual artists have, in effect, done just that. And they found, like Davis did, that if you do it with enough front and with the support of enough shills, you will find an audience, albeit a straw one, credulous enough to applaud you.

This final degradation was still some years off when Stockholm Live 1967 & 1969 Revisited was recorded, but the rot, the awful notes, had fully kicked in. Though the album has merit, that merit comes not from the leader but the two groups of stellar sidemen (see Tracks And Personnel below). 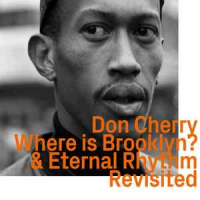 The multi-instrumentalist Don Cherry was in the vanguard of two movements that changed the face of jazz. On both occasions he was present from artistic conviction rather than cold-blooded careerist calculation. To paraphrase the art critic E.H. Gombrich, Cherry embodied the idea that there is no such thing as music, there are only musicians.

Cherry helped pioneer the free jazz revolution of the late 1950s and early 1960s and the so-called world jazz movement of the 1970s. In 1957, he was a founder member of the iconoclastic Ornette Coleman group which, unable to secure paying gigs because club owners considered it too far out, began life playing for friends in Cherry's mother's garage in Watts, Los Angeles. The first half of the ezz-thetics disc, Where Is Brooklyn?, recorded in 1966 and issued by Blue Note in 1969, is approximately in the Coleman bag, with tenor saxophonist Pharoah Sanders, bassist Henry Grimes and fellow Coleman alumnus, drummer Ed Blackwell.

Where Is Brooklyn? is a solid album, but most of the ezz-thetics disc's interest comes in the second half, with Eternal Rhythm, recorded in 1968 and issued on MPS, also in 1969. The album documents one of Cherry's earliest forays into music from cultures peripheral to the jazz tradition. In 1967, he made the first of many exploratory expeditions through Africa, the Middle East and Asia, hitchhiking or travelling in a VW camper van with family members, playing with local musicians and immersing himself in their folk music.

As he grew into this process, Cherry, until 1967 primarily a cornet player, adopted an additional range of instruments, notably a variety of end and side-blown wooden flutes, the Malian doussn'gouni and the metallophones which form part of the Indonesian gamelan. Importantly, like his contemporary, the trumpeter and Fourth World originator Jon Hassell, Cherry immersed himself in the musics and instruments he grafted on to jazz, rather than simply co-opting them for colour, as Davis (and many others) did with the sitar and tabla in the 1970s.

Eternal Rhythm was recorded at the November 1968 Berlin Jazz Festival. Cherry is heard on cornet, gamelan bells and gongs, and South Asian flutes. There are two other gamelan players in the nine-piece lineup, with vibraphonist Karl Berger and prepared pianist Joachim Kuhn complementing them, and the extended gamelan sections which open and close the 38 minute, single-track album are entrancing. In 2022's connected world, it is good to be reminded how ground-breaking Eternal Rhythm was for its time. And it still stands up.

Cherry's own playing connects what are otherwise two quite different albums. Another incidental but significant connection comes from three band members, Where Is Brooklyn?'s Pharoah Sanders and Henry Grimes and Eternal Rhythm's guitarist, Sonny Sharrock. Sanders used Grimes and Sharrock on Tauhid, recorded in late 1966, the first, the greatest and, curiously, the least celebrated of his Impulse albums.

Where Is Brooklyn? & Eternal Rhythm Revisited

Miles Davis & Don Cherry: Which One Is The Grifter?

The Lost Album from Ronnie Scott's

The Art of the (Guitar) Trio

The Lost Album from Ronnie Scott's

In addition to writing and editing for All About Jazz, Chris is editor of the British style/culture/history magazine Jocks&Nerds and consultant Afrobeat historian for Google Arts & Culture and Partisan/Knitting Factory Records.