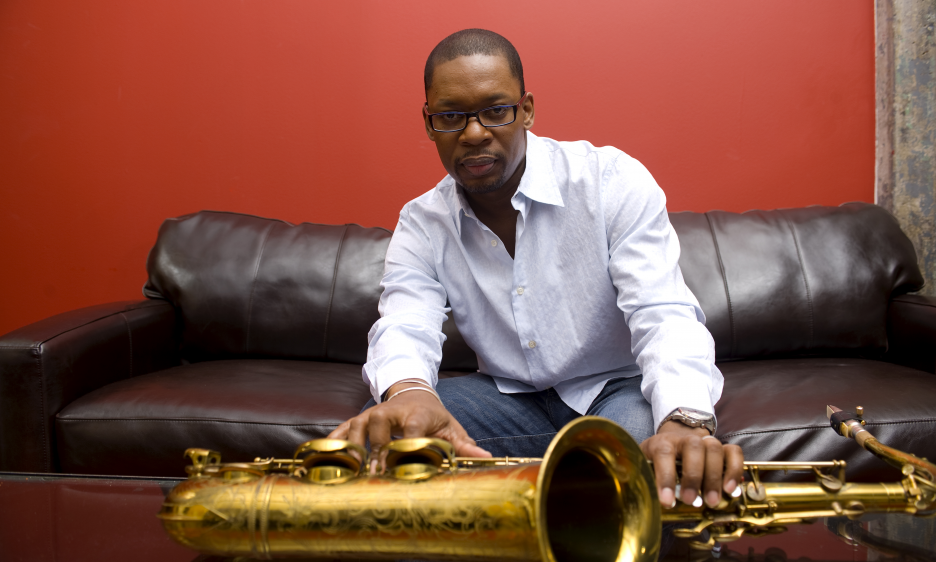 When you have a famous father, whether you are Seun Kuti, Miley Cyrus, or one of the innumerable talented offspring of other celebrated musicians, expectations can be enormous. That especially holds true when one is the second son of the late saxophone genius John Coltrane, and named after the foremost master of the sitar, Ravi Shankar.

However, at 56 Ravi Coltrane has long proven to be his own man, even when he is heading a show consisting of covers of the music of both his mother and father. For such a date, traditionalists might expect the standard acoustic bass, drums and piano instrumentation of the classic John Coltrane quartet. But, Ravi Coltrane is definitely his father's son in that he is not afraid to innovate. So, the concert reflected more the fusion jazz of Chick Corea, Herbie Hancock, John McLaughlin, Al DiMeola, Paco DeLucia, electric-era Miles Davis, and Ronald Shannon Jackson than the 1960s sounds of the late John Coltrane, or the Indian-influenced eclectic music of his wife.

During a four-night run at the SFJAZZ Center, Coltrane brought a fresh crew of younger talent with him. Acoustic and electric pianist Gadi Lehavi, is an Israeli-born prodigy who, at the tender age of thirteen, was invited by Coltrane to play with him at the legendary New York City clubs Village Vanguard and Birdland. Veteran fusion guitarist David Gilmore had Coltrane play on his Unified Presence (RKM Music, 2006). Gilmore has also played as a sideman with a number of stellar musicians, ranging from Issac Hayes and Sam Rivers to Boz Scaggs. The second oldest member of the group, bassist Lonnie Plaxico has recorded a baker's dozen of CDs as leader, as well as playing with Coltrane on his Moving Pictures (RCA/BMG, 1998). San Francisco native (and resident) drummer Elé Howell completed the ensemble.

The Friday show (the second of three: the Sunday show went on without Coltrane after he contracted Covid) opened with John Coltrane's "Expression." Gilmore soloed on guitar, while Howell maintained a heavy-handed backbeat. As was true throughout the show, Lehavi spent more time with his Fender Rhodes than with his grand piano. While Coltrane soloed, with a series of bursts on tenor for this tune, he moved to soprano for his dad's composition "Spiral." Lehavi soloed on his Rhodes. Howell soloed with gusto, and Coltrane bent down with his soprano, adding layered texture.

Coltrane then introduced the band, saying "These are all my people," and told us it was an "honor and a privilege" to be together on the stage. He also remarked how pleased he was to be able to be live on stage again.

Next up was "Jagadishwar," a tune from Translinear Light (Impulse, 2004). Coltrane played tenor on the original, and he and his brother Oranyan convinced his late mom to record the album. While Coltrane, who changed her name to Turiyasangitananda, had recorded lush, orchestral albums previously, this one marked a return to her jazz roots. (She had replaced McCoy Tyner on piano in the Coltrane quartet in 2006). Howell switched to mallets, for a softer sound, and Coltrane arched forward as he played his tenor.

A lush "After the Rain" was followed by John Coltrane's "Your Lady," which offered explosive soprano sax solos from Coltrane and an extended, super rapid solo from Gilmore during which he employed some of his six foot-pedals. Plaxico soloed on his Arco bass.

The evening concluded with Alice Coltrane's "Los Caballos," a spirited Latin-influenced tune which, Coltrane related, had featured Carlos Santana on the original. Coltrane, soloed intensely on sopranino, the second-smallest member of the saxophone family, while Howell and Gilmore played with their customary hard-hitting enthusiasm.

Harry attends lots of concerts in the Bay Area.