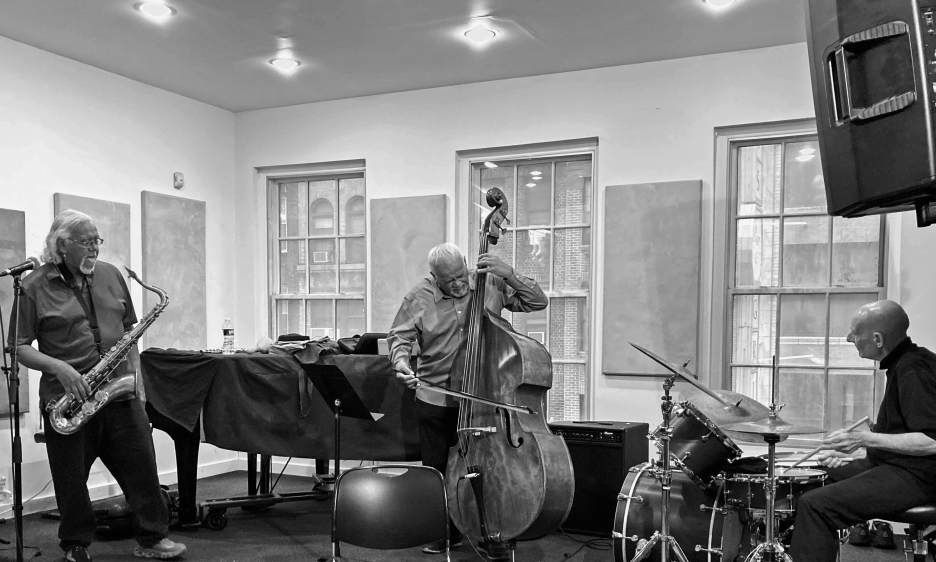 Lee "Mixashawn" Rozie is a member of the Maheekanew Confederacy of Algonquin-speaking people. Rozie is Mohegan and his name "Mixashawn" means "the messenger on the wind." The multi-instrumentalist has not been heavily recorded over his long career, perhaps, in part, because he remains close to the spoken traditions of many indigenous peoples of North America. Rozie is an author, an activist for social justice and a storyteller and has practiced that ritual for decades through music, narration, and poetry. His music manifests itself as free jazz interpretations of native cultures and those that gave us jazz. He calls these ideologies "hemispheric principles."

In the early part of his career, Rozie released Afro Algonquin (Moers Music, 1980) as leader of The Afro Algonquin Trio with his bassist brother Rick Rozie, and the great Rashied Ali. He played and recorded with the Beaver Harris / Don Pullen Quintet during their 1982 tour of Austria. Rozie recorded with one-time Ornette Coleman drummer Ronald Shannon Jackson on Street Priest (Moers Music, 1983). Under the billing "Mixashawn and Word Out," he self-produced Jazz in the Wilde (1995), with his brother, and Motown drummer Billy Arnold. In 2008 he was a member of Dave Douglas' project Don Cherry's Symphony for Improvisers, performing and recording in Paris for a Radio France broadcast. The Douglas ensemble included Roy Campbell, Henry Grimes, Andrew Cyrille, Hamid Drake, JD Allen. Rozie has appeared in more than one dozen albums in supporting roles including Kidd Jordan's Intuit (Flying Note, 2016). He performed with William Parker's Extended Breathe Ensemble the same year. He is the author of Indigenous Roots of Social Evolution: Interpretation of Historical Data (Self-published, 2018).

Rick Rozie began playing the piano at the age of five, switched to drums, and eventually double-bass. He has played with the Anthony Davis/James Newton Quartet, Chico Freeman Quartet, The Barry Altschul Quartet, and the Muhal Richard Abrams Orchestra. R. Rozie has performed in the Kansas City Philharmonic since 1968 and taught double bass at the Hartford Conservatory and the University of Connecticut.

The Afro Algonquin Trio has a history of legendary artists occupying the drummers' throne. Pheeroan AkLaff followed Ali, and Royal Hartigan takes over the role for this performance. He has studied, taught, and lived in Africa, Asia, South America, and Europe. As a percussionist, he has explored the percussion cultures of Ghana, the Philippines, China, Korea, Trinidad, and Java, collaborating with native masters. Hartigan has played jazz festivals on four continents, and thirty years ago, he founded the Blood Drum Spirit ensemble releasing four double CDs. He has recorded with Bobby Bradford, Hafez Modirzadeh, Ken Filiano, Fred Ho, Talking Drums, Rudresh Mahanthappa, and many others.

Hartigan was a Fulbright scholar to the Philippines and Ghana, and he has written five books and produced an award-winning film, We Are One. He has facilitated educational residencies, workshops, and lectures at institutions and universities across the U.S. and abroad, including the China Conservatory, the University of Ghana, Nagoya Yamaha Japan, and the University of the Philippines. Hartigan was a professor at UMass Dartmouth from 1999 to 2018 and taught at San Jose State University, the New School, and Wesleyan. He received his Ph.D. from Wesleyan in 1986.

An empty chair is positioned in front of the stage is a placeholder in respect for African slave Joseph Emidy, an ancestor of the Rozie brothers. That's a story for another time but it says much about the merging of freely improvised jazz and spirituality. All the members of this trio know such connections personally.

The program opened with "Song to Behold," a perfect choice for coalescing these musical worlds and filtering the music through the ears of master innovators. Mixashawn, who primarily works with the tenor saxophone, begins on the flute, later adding some vocalizing. R. Rozie plays arco here and Hartigan uses a combination of hands, mallets, and sticks to evoke varying moods. The roof comes off with a marathon "Fridgeo." Mixashawn's tenor method is comprehensive. While he gave the audience some raw energy, his mastery of development and space make the music accessible. R. Rozie and Hartigan have commanding solos. Mixashawn's distinctive playing stands out on "We Need You Monk" and "Rock Steady Resurrection" even while giving the rhythm section space to find themselves in some very intricate waters. "The American Indian Movement Song," the only non-original piece of the afternoon, has been called an inter-tribal national anthem of Native Americans. In its traditional form, wordless vocals are accompanied by a fixed drum beat. In the hands of the Afro Algonquin Trio, it is ethereal at times, fiery at others, and unlike any other arrangement.

In the relatively compact space of Michiko Studios in midtown Manhattan, the Afro Algonquin Trio expanded their music beyond geographic and cultural boundaries; two forms of American music working in harmony. AAT's music is a dichotomy; honest, unknown, dense, unearthly. Most appealing is the genuine sense of wonder that the musicians share with each other and the audience. Mixashawn's website needs some "events" updating but is worth checking out for the opportunity to hear something very unique, educational, and entertaining.