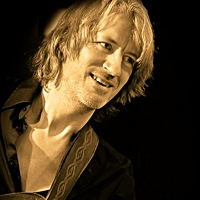 With such a technique, and such a rich sound, who knows how to borrow with elegance from Jim Hall, as much as from John Abercrombie.
—Jean-Yves Chaperon, Zurban

Guitarist, with a very unique ﬁnger playing technic, French Ibanez guitar schools teaching director, Nancy’Music Academy International permanent member, Yannick Robert is very active on the french and international jazz and fusion scene since years. He is endorsed by Ibanez since 1992, who built for him a Fretless signature model, he takes part to the Fretless Guitar Masters and Village of the Unfretted recordings. He is also endorsed by Savarez strings.

He recently took part on the cine-concert of the original movie soundtrack The Artist with the Strasbourg symphonic orchestra and the composer Ludovic Bource.

He produced more than twenty methods and teaching Dvds, and has released about twenty albums among which La Danse du Chat (2011) and Echec et Malt (2013), recorded at Peter Gabriel’s Real World Studios with the Blues & Beyond Quartet, with world known bass player Dominique Dipiazza, harmonicist Sébastien Charlier et drummer Yoann Schmidt, with whom he has toured in the whole world.

He recently released with his Soul Cages Trio (2017) an album dedicated to jazz arrangements of Sting’s compositions, and also Baïkal (2017) in duet with Belgian bass-player Benoit Vanderstraeten, and ﬁnally with the Millenium trio (2018) with Franck Agulhon (drums) et de Benoit Vanderstraeten (basse).

Yannick Robert is guitar referent at the MAI, and collection director at MAI BOOKS, LEMOINE and HAL LEONARD editions. He has also recorded a lot of teaching modules for the music teaching website imusic-school.com.

“..With such a technique and such a rich sonority, which borrows with elegancy to Jim Hall and John Abercrombie…..A lot of imagination, energy and movement.” ZURBAN – Jean-Yves Chaperon

« One of the most interesting fusion artists coming out from Europe in recent years, French guitarist and composer Yannick Robert truly conveys a world vision, mixing a wide spectrum on his sonic palette, from « Celtic Jazz » to Funk

They told about him…

“..With such a technique and such a rich sonority, which borrows with elegancy to Jim Hall and John Abercrombie…..A lot of imagination, energy and movement.” ZURBAN – Jean-Yves Chaperon

« One of the most interesting fusion artists coming out from Europe in recent years, French guitarist and composer Yannick Robert truly conveys a world vision, mixing a wide spectrum on his sonic palette, from « Celtic Jazz » to Funk. Equally at home on fretless guitar, archtop or solid body rocker model, he stretches out with an assured independence in an electric trio setting. In Yannick’s solos you can hear the Metheny’s influence ; in his compositions, there hare harmonic similarities to Swiss Thomas Moeckel – and that’s not a bad thing… » JAZZ.COM – BILL BARNES

« Yannick Robert is a very serious guy. This outstanding guitar player is one of the fretless guitar specialists. Rare, then precious. » Baptiste Monnot - LE PROGRÈS

« … Yannick Robert's virtuosity, equally comfortable on a normal guitar or on a fretless one, will charm all the melodic guitar playing lovers.... » M.R – GUITARE EXTREME

About « MAID OF THE MIST » « Here is a very melodic and groovy Jazz Fusion ! Orchestrated by french guitar player Yannick Robert, this album is a mix of Hip Hop, reggaes grooves and swings, original compositions and some covers like Tutu (Miles Davis), Lady Madonna(Lennon/Mac cartney) or Estate. Gorgeous ! » GUITAR EUROSHOP

“Robert's music – that means all the titles except three exquisite covers – finds its way at once with smart and wheeling melodies that seduce you, just like the first track 's imparable riff”. MUSICIEN MAGAZINE “Very difficult to not be seduced by the obviously charming groove that opens the new Yannick Robert CD... Félix Marciano – JAZZMAN “Yannick Robert seems to have found the perfect balance between knowledge and euphoria. Delectable.” Raoul Duplessix – GUITARISTE MAGAZINE

“When a Jazzman is pedagogue, when his new album combines intelligence with euphoria, when melody is happiness, it is just amazing !” GUITARISTE MAGAZINE – Olivier Garcia

About « DIX CORDES DE NUIT » «The very special thing about this duet album comes from the fretless instruments, bass and guitar, that gives a very original touch ! » GUITAR EUROSHOP

A lot of publications about improvisation, comping, and phrasing, that can be used for every clinic. Clinics can be given in french, english, and spanish. A lot of learning modules are also available on www.imusic-school.com Yannick Robert is the teaching director of the french Ibanez guitar schools, and is a permanent member of the Music Academy International of Nancy (France) since years. For more infos, visit my Gumroad page at www.gumroad.com/yarobert

ALL VIDEOS
Yannick Robert · Message In A Bottle 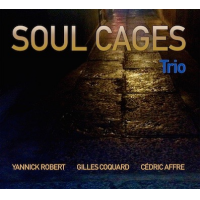 Message In A Bottle

All About Jazz musician pages are maintained by musicians, publicists and trusted members like you. Interested? Tell us why you would like to improve the Yannick Robert musician page.